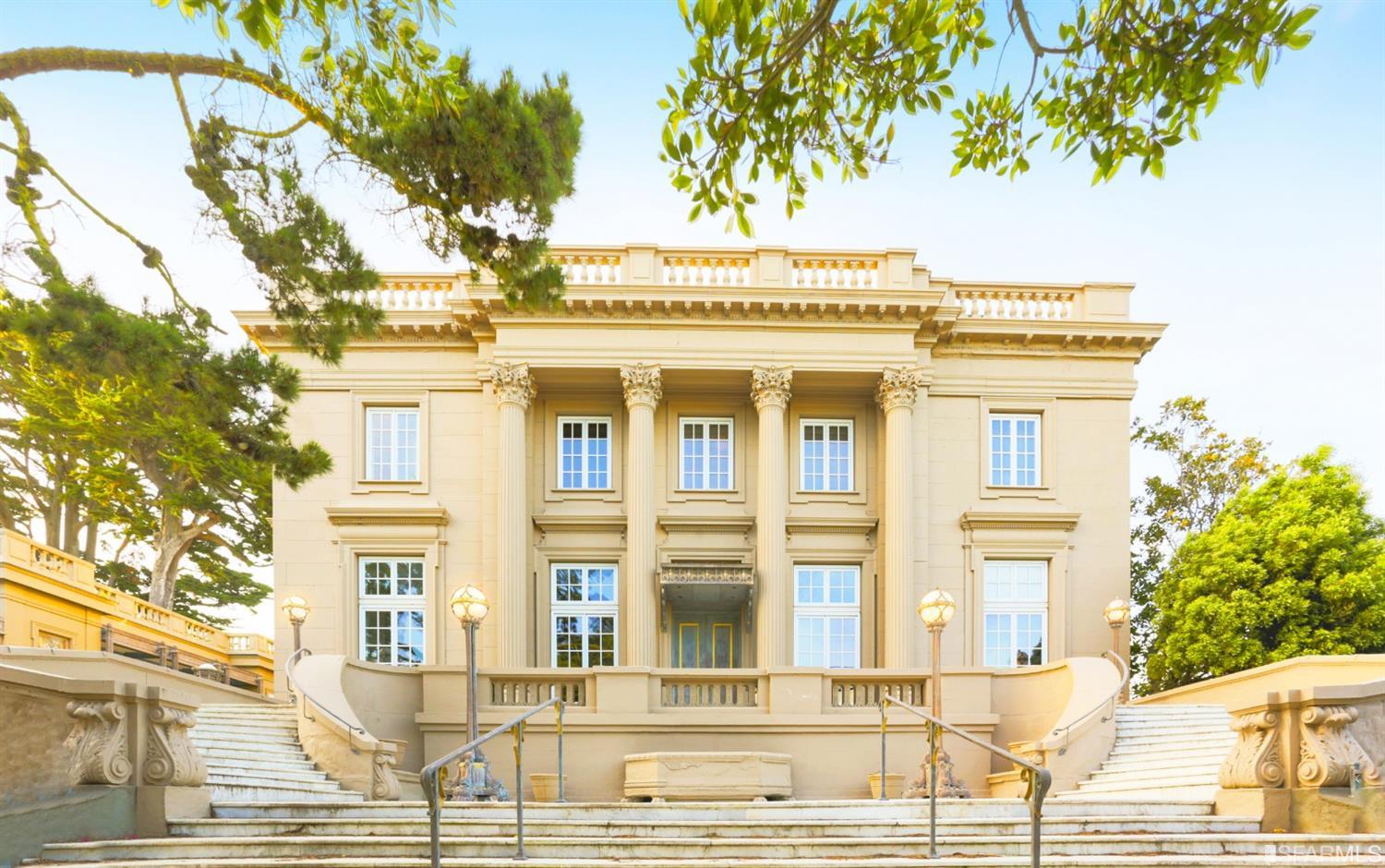 The sprawling, literally palatial mansion at 3800 Washington Street is one of San Francisco’s most beautiful and historically important properties–and one of its most often neglected, sad to say.

This circa 1904 gem is a familiar sight to SF housing watchers afters its many travails on the market over the past decade. Now it’s coming to bear again, listed as “coming soon” by realtor Joel Goodrich, with an attached $19.8 million price tag.

“The breathtaking Le Petit Trianon […] is inspired by the original world-renowned building at the Versailles Palace in France, constructed between 1763 and 1768 by King Louis XV,” Goodrich writes.

The royal pedigree is true, and nearly 40 years ago it landed this blue-blooded Presidio Heights mansion on the National Register of Historic Places–there it’s called the Koshland House, and the register describes the facade as “an academic replica of Le Petit Trianon at Versailles” praising “the quality of its interior detailing” and adding “its period and type define the end of an era in San Francisco.”

The namesake Koshland was a Bavarian immigrant who founded the wool company S. Koshland and Sons. Wife Rosina spread the family fortune around SF as a philanthropist and patron of the arts in her widow years.

So yes, 3800 Washington is certainly known for its beauty and architectural style: It’s also noted for constantly hopping on and off the market, with many strange turns in its history. This will be the fourth attempt in two years to net a new buyer here: It listed for $23.8 million in 2019, then came up again in April of 2020 for $21.8 million, then popped up a few months later in August seeking $20.8 million.

The last time this place sold was in 2016 for $15.75 million–a loss compared to its $19.5 million sale from nine years earlier. Note that we have a discrepancy in the price–city records record the 2016 sale as just $12 million, versus the higher figure for MLS.

Prior to 2016 the address had an equally wild and wooly history, with former owner and CNET founder Halsey Minor listing it for sale many times, the price wavering from as much as $25 million down to $12.5 million.

At one point a squatter turned the historic property into his personal abode (shades of la revolution, perhaps), stealing much of the interior. We saw fake-out near sales, several designations as an abandoned structure, bids to divide the property, and constant anxiety over how its architectural value could be preserved.

Somewhere along the line there was even a rumor that Taylor Swift was considering buying it in 2014. If this was true, it never came to pass–maybe she saw it as troubled when she walked in.

That’s all in the past now, and the last few years have been comparably kind to this storied address, which served as the setting for the 2019 Decorator Showcase, a venue that demonstrated to relieved preservationists that the ups and downs had seemingly not harmed the grandeur of the old place.

Hopefully this new sales bid will bring more good tidings to the property–it’s certainly earned them.