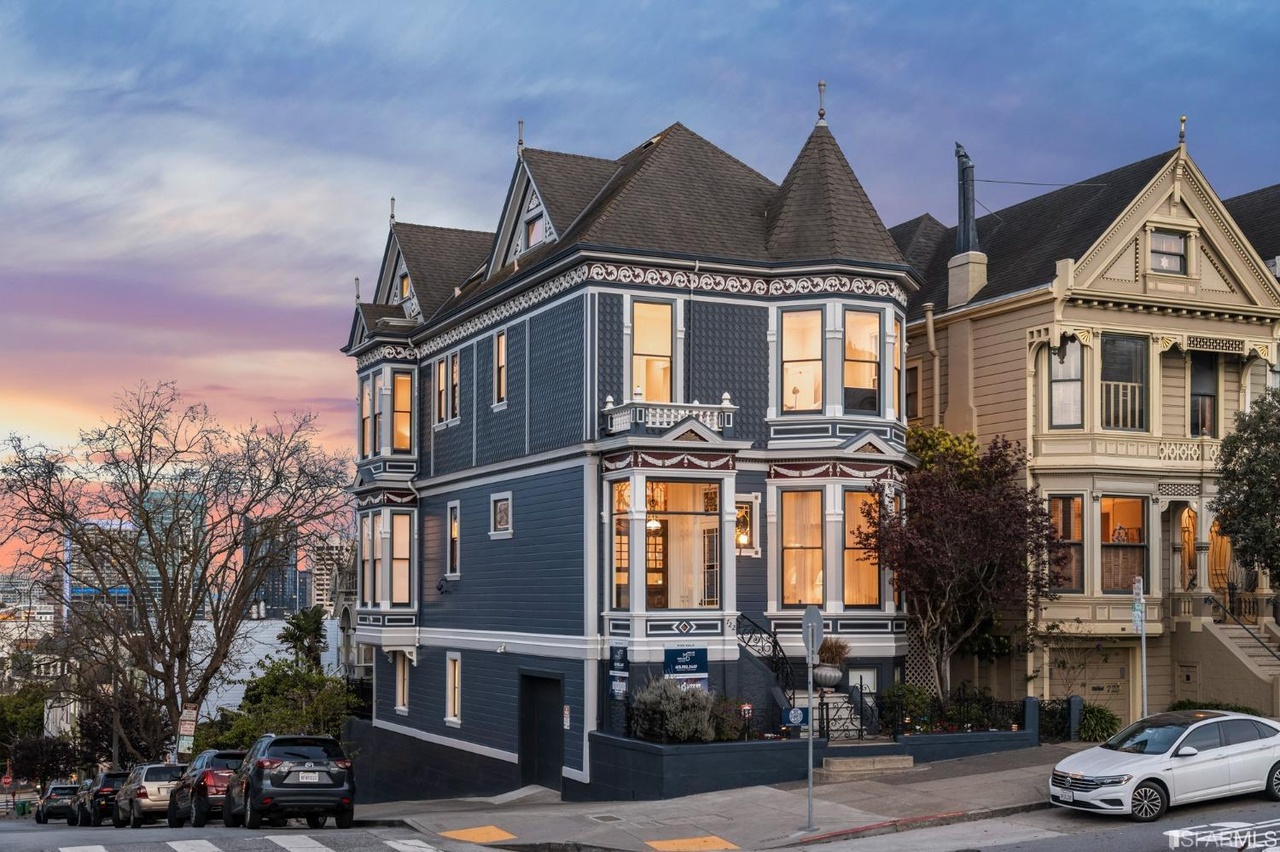 Ah those Painted Ladies, there’s just no escaping them.

Usually when people think of the ladies of Alamo Square they’re imagining one of six homes on Steiner Street, but there is a seventh member of the family: The larger, slightly out-of-place home at 722 Steiner Street, right on the corner.

Mind you when we call it out-of-place it’s not a critique–just an observation that its facade clearly breaks the pattern of the other six, and so there’s sometimes some debate about whether it counts as part of the set or not. Although note that this house was also the product of Matthew Kavanaugh, the same developer responsible for the rest of the street–in fact, Kavanaugh himself lived at 722 Steiner for some years.

(Supposedly, the seven homes together are known as the Seven Sisters–we say “supposedly” because when was the last time you ever heard anyone actually say that?)

Believe it or not, despite its historical pedigree and lustrous exteriors, this six bed, 5.5 bath corner-copia has had some trouble wrangling buyers in the past; in 2010, for example, it listed for $4 million even, but failed to attract a buyer despite its world-famous locale.

In 2014 it popped up on the market again, aiming for another $4 million, but chopping that down to $3.5 million after a few weeks. There finally was a sale this time around, although for $3.1 million in the end; yes, one of the most famous and oft-photographed houses in all of San Francisco was an underbid the last time it went to market.

The buyers there were tech moguls Charlene Li and Come Lague, who among other things repainted the place from its longtime spearmint color, opting for the swankier color palette we see today.

Now they want to pass it on, with a price tag of $5.75 million for their troubles. In spite of the false starts last decade, we’ll go out on a limb and guess that this Steiner house sale will probably not stall this time; things are just too nuts right now.

It is worth noting that this home is part of the Alamo Square Historic District and and under the oversight of the Historic Preservation Commission, which can startle certain kinds of buyers. But again, a lot of work has been done on the place in recent years already, so perhaps would-be buyers won’t feel the need.

Amazingly, the city’s registry of more than 200 historic landmarks does not include any of these seven homes–who knew?