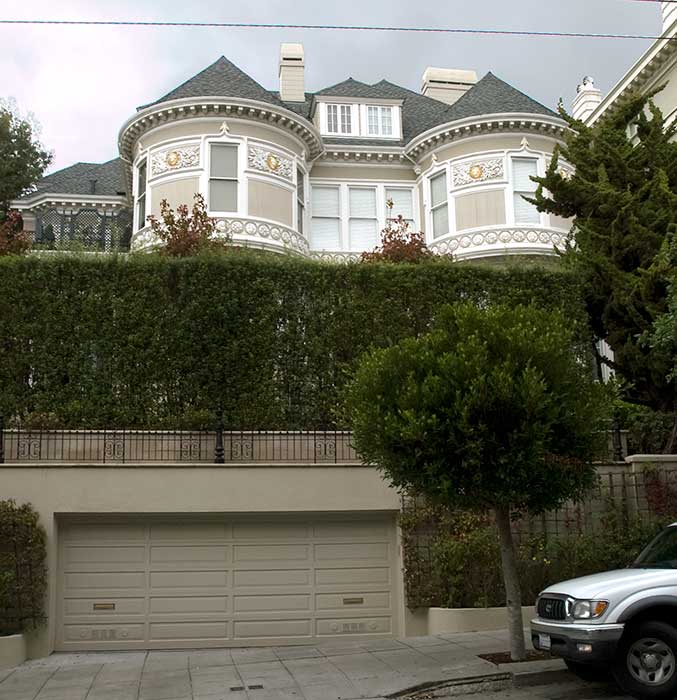 One of San Francisco’s most prominent haunted houses is up for sale–if you believe in such things, of course.

The house dates to 1887, and like much of the surrounding neighborhood was spared the depredations of the 1906 quake and fire. Pac Heights features many of the oldest still-standing homes in the city by virtue of being west of the few fire breaks that successfully held up to the flames during that tragic three-day period.

This means the neighborhood sports some of the most colorful SF housing history…as well as its highest concentration of superstitions.

After Chambers died in 1901 he left the house to his two nieces, who feuded over it for years. In fact, this mansion is actually two units–2220 Sacramento next door is not for sale–supposedly on account of they divided the property between them.

One niece died in her half under hazy but seemingly gruesome circumstances, often related as a “farm implementation accident.” Yikes. Supposedly, her restless ghost has wandered ever since, and passersby sometimes report strange lights in the windows at night–again if you believe such things. The home features prominently on a Pac Heights ghost tour every fall.

That’s the popular story, at least. The catch is: Most of it never actually happened. Chambers really did take in a pair of nieces, but after his death they were evicted from the property, despite their efforts to sue for ownership. If either haunts the place, it’s not because they died there. Still, the tale persists.

The current listing by Compass does not mention any of this family history, which is really not surprising: Silly as it sounds, Hong Kong University of Science & Technology researchers found that rumors of ghosts can depress home values as much as 20 percent. A few states even have specific laws regarding the buying and selling of allegedly haunted houses, though California is not one of them.

You could also argue that such tales detract from the true beauty and historicity of a home like this (the city designated it a landmark in the ’80s), which is a gem of both the Victorian era and style. And yet, the very fact that such stories linger proves that they have value all their own; personally, we think an opportunity to buy a piece of folklore alongside a piece of property is a great bonus.

But lest we be accused of trying to put a chill on this latest offering, note that pretty much all of the strange tales about the house are debunked, and anyone who can afford the dire price tag would be silly to pass it up.

The last time 2222 Sacramento sold was in 2005 for $3.5 million, which after inflation is only a little less than it’s asking now.