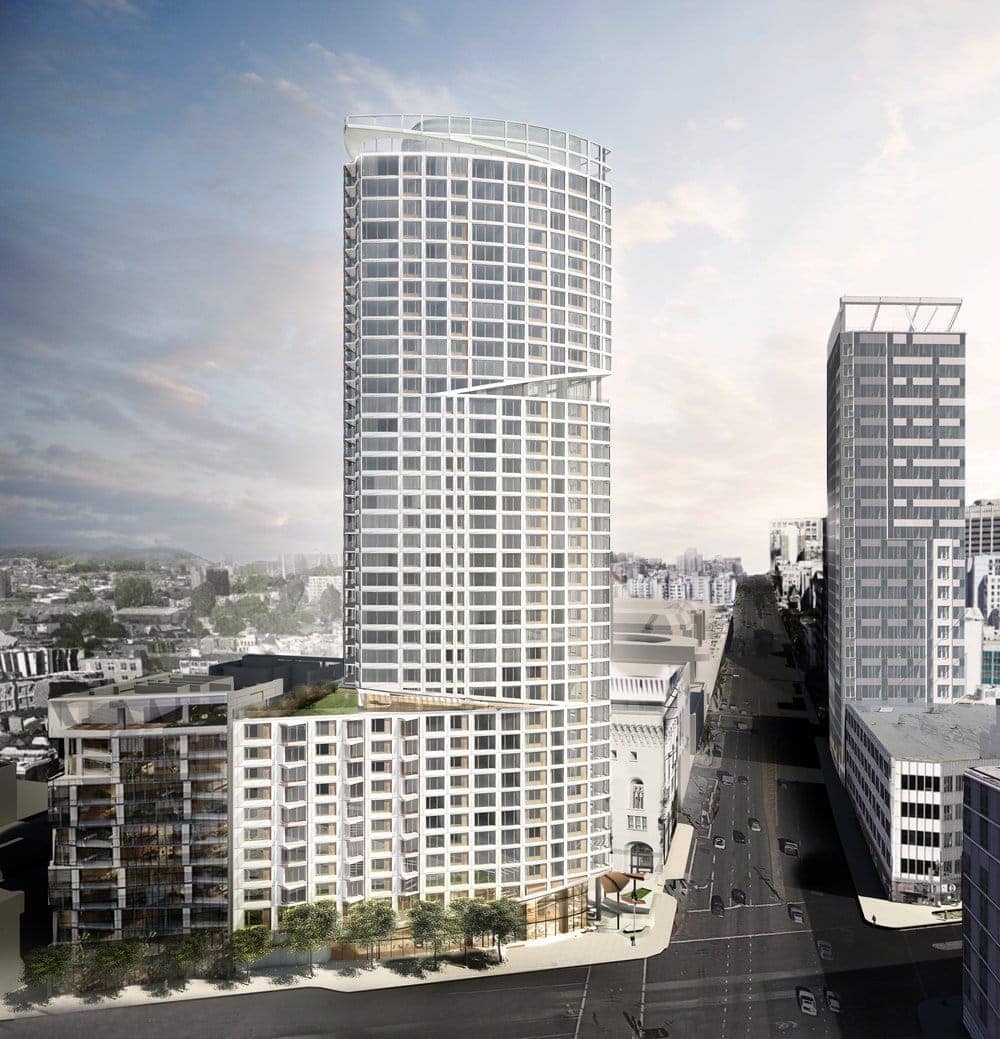 When it comes to San Francisco’s building boom, the proposed high-rise at One Oak Street has long looked like the one that got away. Now there are finally signs of life again for this towering question mark, as the developer behind the would-be edifice is seeking permission to increase its scope by roughly 50 percent.

In case you forgot, developer BUILD wants to erect a luxury condo tower at One Oak, the three-way block where Van Ness, Oak, and Market run into each other, with the original proposal for 300-plus units here stretching all the way back to 2009.

Norwegian architecture firm Snøhetta, the same company behind the addition to the SFMOMA a few years back, designed a distinctive cutaway edifice for it. BUILD got permission to, well, build back in 2017…and nothing happened.

In the years since, other high-rises have appeared on nearby blocks, radically changing the profile of the area, but One Oak has yet to sprout. This went on so long, in fact, that BUILD had to get an extension on their permits in 2020, lest they expire like bad milk.

BUILD claims that the way things are now the project isn’t profitable enough to go ahead with. Note that among other factors, the UK-based consulting firm Turner & Townsend estimated that San Francisco is the third most expensive city in the world to build in 2021–and in some years since 2017, it’s ranked number one. The pandemic drove construction costs even higher in SF by reducing the available labor force.

Since the entitlements also included financing for more than 70 below-market rate units to be included in a separate building, the fate of nearly 400 new homes in the area has remained in Limbo for years on end now.

Presumably with their financials in mind, the developer has now applied to increase the scale of the tower project (the SF Business Times noticed the application first), aiming to increase from around 300 units to over 450, with the new additions running the gamut from studios to three-bedroom setups. This, presumably, will push their expected profits up high enough to make construction–at long last, construction–worth the plunge.

Potentially, this represents a watershed moment in which this long-delayed high-rise may finally rise…or it could set the whole thing back to square one. It all depends on whether the Planning Commission–now a very different body than it was four years ago–takes to the new units or not.

There’s no word yet on when BUILD will get a hearing; since the commission isn’t meeting again until the end of August, it’s not a good idea to hold your breath about it–or anything else to do with this development, it seems.