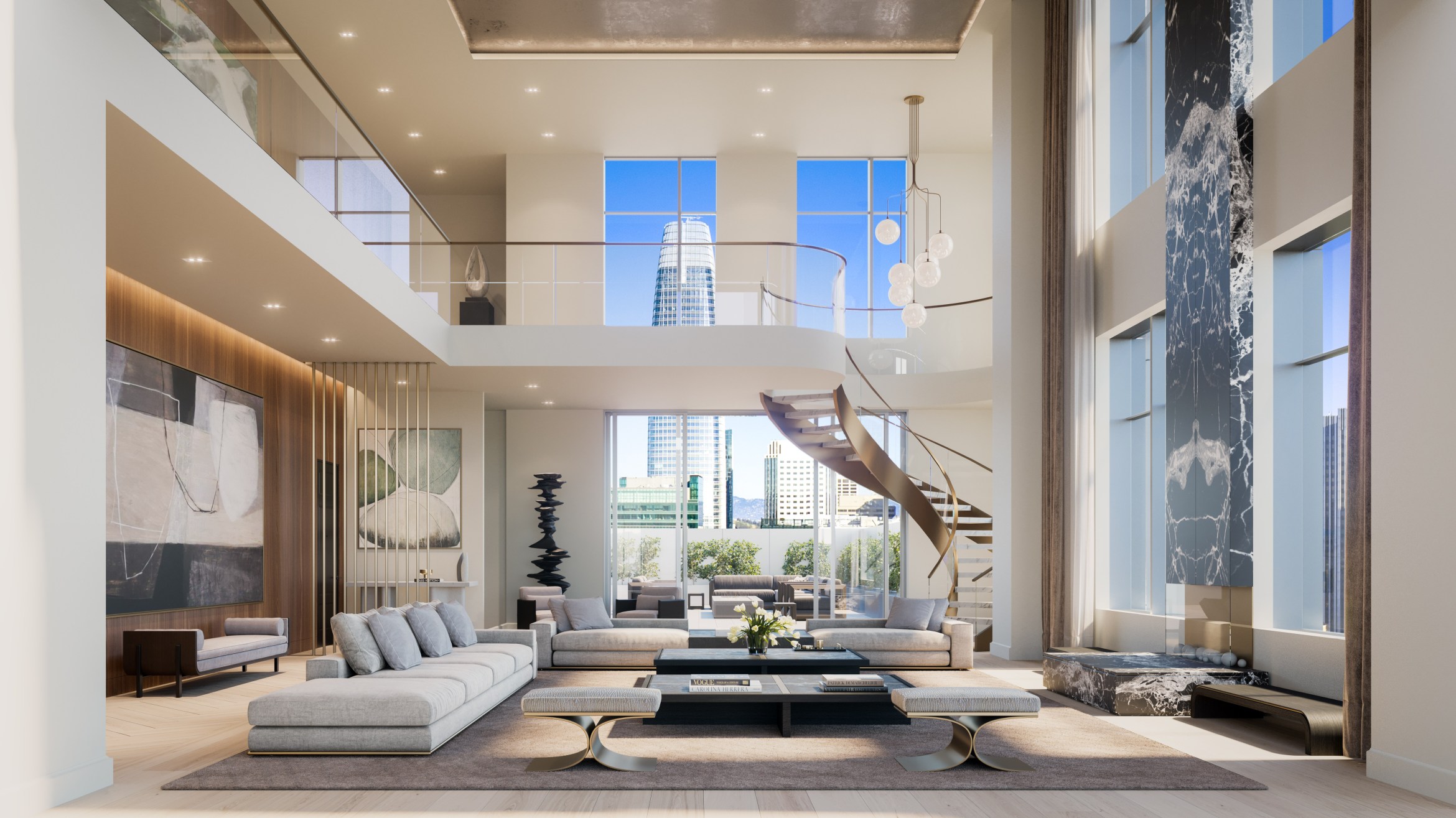 Not something we showcase everyday, because these kind of homes don’t come around that often, but we thought you might like to swoon over the Top 5 Most Expensive Homes Currently For Sale in San Francisco:
—
Number 1 -$49,000,000
Topping out the list at $49,000,000 is the (not yet complete) grand penthouse at the new Four Seasons Tower in Downtown San Francisco.

Slated to be roughly 10,000 square feet and contain roughly 4500 square feet of outdoor space (including infinity pool) the details are still not set in stone, but one thing is for sure, it’s going to be awesome.

“The 45-story, 510-foot Four Seasons tower, which uses the 1903 Aroson Building as part of its construction, can be seen at Mission and Third streets. The exterior features a mix of floor-to-ceiling windows, an undulating stone facade, and the aforementioned 1903 structure, which was recently renovated.

Pricing for the 146 residences will begin at $2.5 million, the regular penthouse residences (11 in all) are priced in the $15 million to $25 million range, and the grand penthouse comes in at $49 million. The building is slated for completion in 2020.”
[Listed by Four Seasons Sales Department]

Details are few by following the link directly to the property webpage, but if you are like us and keep tabs on all things SF real estate, you’ll know our friends at Curbed have the scoop (of course):
“Featuring four bedrooms, six-and-a-half bathrooms, and 6,941 square feet, the grand penthouse, offered as a turnkey residence, was designed by Hornberger + Worstell and comes with interiors by Mary Ta and Lars Hypko, founders of Los Angeles-based MASS Beverly, who’ve worked on homes for Elon Musk and Jay Z…”
We couldn’t have said it better ourselves, but we can certainly get you in for a look if you’re so inclined.
[Listed by Leo Medeiros, Compass Development]

Number 4 -$39,000,000
It’s hard to believe $39,000,000 only puts you in the number four slot of San Francisco’s most expensive homes for sale, but c’est la vie in the world of ultra-luxury. Situated on the most coveted block in all of San Francisco, 2799 Broadway gets a seat at the top 5 table by way of simply dazzling the real estate nut in all of us.

“The residence has 6 bedrooms, 7 baths, 2 half baths, a library, a billiards room with antique bar, a formal living/dining salon ideal for entertaining on any scale, and a great room that includes the eat-in chef’s kitchen and inviting family room opening to a landscaped south terrace. The smart home also boasts an elegant elliptical staircase, an elevator, 4-car garage w EV charging station, and abundant storage. The upper-level terrace showcases panoramic views unfurling from the Golden Gate Bridge, across the bay, to the Oakland Hills. This is a rare opportunity to own in a world-class location with world-class views.”
In case you’re wondering, the price per square foot on this gem…$3,352.
[Listed by Deborah Svoboda, Sotheby’s]

Number 5 -$29,800,000
Yet another home with ridiculous curb appeal, all the bells and whistles, including an amazing location and breathtaking views (not to mention one downright awesome garage), 2646 Union checks in at $29,800,000.

Claiming to be the “pinnacle of San Francisco family residential design” (clearly the prior 4 homes don’t cut the mustard), 2646 Union comes with four bedrooms, seven and one half baths, LEED Platinum certification, and one amazing roof deck with other worldly views, so let’s get you in for a look, shall we?
[Listed by Val Steele, Compass]

Hot day, Summer (October) is in the city. Get after it.