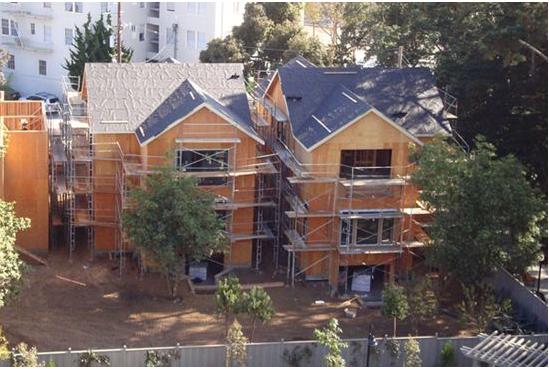 Some time ago, I noted the construction in West Portal and asked around the Front Steps for the scoop. Those folks on the steps always know a lot, and more importantly, they like to argue. We had ideas that the construction would yield five- no, six- no, seven- no,  eight homes. They were to be made of the cheapest- no, the most luxuriant materials. They were to be a blessing to- no, a curse, on San Francisco housing.

One thing we all seemed to agree on was that a stand of less than ten single-family homes was not the way to maximize that open space in West Portal. A larger building  project, sized to maximize density, would have been a better call.
Still, the call was made; and without much of the NIMBY drama that normally plagues construction, Arden Estates are here.
Well, almost. The now live website’s photo gallery so far boasts one photo (seen above). Such dearth is logical since the homes aren’t done yet; however, the location is awesome for families, and the units back up onto a thick mass of trees that completely belie an urban setting. Plus,  their plans look pretty sweet (see below: Click to enlarge).
And to the Front Steppers who argued over units, there are to be seven stand alone homes here. Each will have three bed rooms + a bonus room, three baths, high end finishes, attics, 2-car garages, fireplaces…. and geez, more, more, and more. Frankly, I’m getting light headed. You can see the list yourself by visiting the amenities link on the website.
Price is, unsurprisingly, not advertised on the website. However, rumor has it these homes will run in the $2 million range.
So that’s me out of the running for one of these beauties, unless you’ve all been fooling me and there really is a Santa. If so, Santa, if you’re reading, I’ve been a very good girl.

20 thoughts on “The Scoop: Seven Arden Estates Have Risen from the Earth”