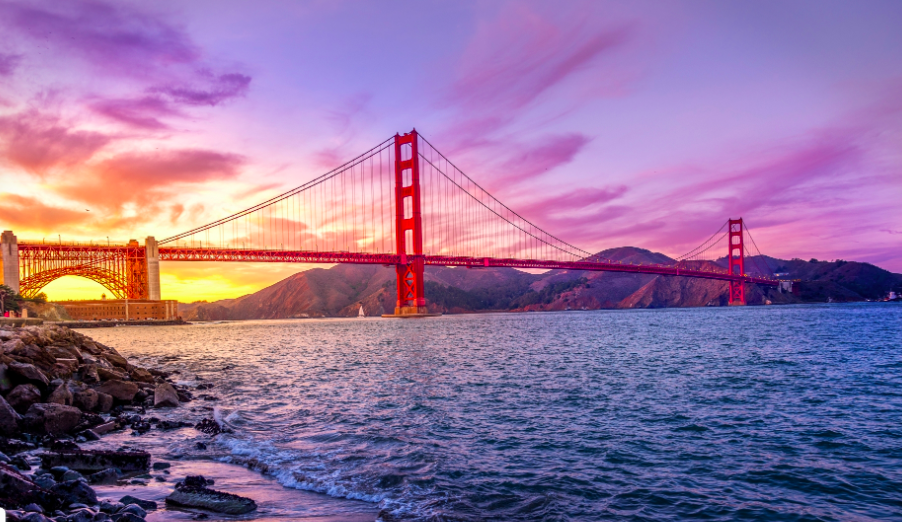 The Golden Gate Bridge, our world-recognized icon of all things San Francisco, turns 85 today–and it isn’t even the least bit shy about its age.

Such a momentous occasion calls for just one thing: trivia. Tons upon tons of trivia. So here are 85 completely true but sometimes unbelievable facts about the greatest span in the world.

1.The first official proposal for a bridge to Marin came in 1872, from the Central Pacific Railroad. Prior to bridge construction, crossing the bay by ferry took 20-30 minutes.

2. When it first opened it was the longest suspension bridge in the world, but now it ranks as only the ninth.

3. It did hold the number one spot until 1964 though probably because at time of construction it was more than twice the length of any other.

4. By the way, the WIDTH of the bridge is about 90 feet, more than two-thirds of that being roadway.

5. The bridge’s two towers held the record for being the tallest until 1998.

6. Chief Engineer Joseph Strauss developed a fascination with suspension bridges while hospitalized in a room overlooking the John A. Roebling Bridge, without which our own famous span might not exist.

7. Strauss was also a poet. After the construction wrapped up he wrote, “At last the mighty task is done; Resplendent in the western sun the Bridge looms mountain high; Its titan piers grip ocean floor, Its great steel arms link shore with shore, Its towers pierce the sky.” Nice touch.

8.. San Franciscans filed over 2,300 lawsuits against the bridge before construction even started. Because of course.

9. Although a railroad baron made the first pitch for a north-going bridge, it was also a railroad company that pushed the msot serious litigation against bridge construction–because South Pacific Railroad owned the ferries, you see.

10. Although the entire bridge is 1.7 miles, only 1.2 miles of that is actual suspension span.

13. Those lighter replacements were mostly from the 1982-1986 main deck retrofit, to correct corrosion over the years from–surprise!–the salty air.

17. The cable manufacturers had to design a new system capable of producing 1,000 feet of cable per day in order to fill the order in the 14 months the city gave them.

18. Those main cables are about three feet around.

19. There are 128 lampposts along the roadway, in case you ever wanted to count.

20. Each bridge tower contains about 600,000 rivets. Don’t count those, you’ll just hurt yourself.

21. A lot of sources will tell you that the midpoint of the bridge sits 265 feet above the water. In reality, of course, how high above the water you are depends on the time of day, but apparently this doesn’t occur to some folks.

22. Charles Ellis, a Vice President at Strauss Engineering Corporation, did most of the bridge’s design work. In December of 1931, his bosses sent him on vacation, then fired him while he was away, and to this day no one knows exactly why. It took until 2007 for Ellis to even get credit for his work publicly.

23. In 1935, an earthquake hit the still-incomplete bridge and the construction elevator broke with a dozen workers stranded on one tower, but no one died.

24. In all, the bridge’s four-plus year construction did see 11 casualities, ten of them from a single accident in which a collapsed scaffold fell through the safety net below. In that same scaffold collapse, one worker managed to jump to safety; two others plunged into the bay but miraculously survived.

25. While that is tragic, by the standards of the day a project of this size should have killed a lot more people. Historian Stephen Cassady says the bridge build was the first major engineering job to fire workers for failing to follow safety protocols.

28. Another innovation: “Glare-free goggles” to prevent snow-blindness from the constant reflection on the water.

29. Management administered sauerkraut juice as a hangover cure to workers during construction. Not all innovations are created equal, seemingly…

31. The bridge came in exactly on budget: $35 million. Initial projections had been over $100 million, so hey.

32. The district estimates that with higher modern construction costs, creating the same span in 2003 would cost $1.2 billion, but also kill fewer people.

33. Strauss original design would have cost only about $17 million. Unfortunately, it was ugly as sin.

35. The name “Golden Gate Bridge” also dates to 1917, most likely also a product of Strauss.

36. By the way, almost all of that money came from just one voter-approved bond in 1930.

37. The federal government’s War Department had to issue the bridge permits, since it owned the land on both sides. They were TREMENDOUSLY worried about this bridge scheme, fretting among other things that the if the bridge collapsed during an earthquake it would trap Navy ships in the bay.

38. For reasons that presumably made sense to them, the War Department brass were also VERY worried that the bridge would not be visible enough to incoming ships. Hence the now-famous International Orange color, specially designed to be spotted from afar. Although, it’s a giant suspension bridge, so they probably didn’t need to worry that much…

39. Then again, one ship did crash into the bridge before it was even completed, in 1933, so maybe that shows what we know.

40. You have by now probably seen the infamous “bumble bee” and “candy cane” bridge designs, both also attempts at increasing visibility. We certainly will never be able to un-see them.

42. Sherwin-Williams sells the bridge its paint, although they must put in a competitive bid for the contract every time just like anyone else.

44. The bridge is not in fact repainted every year, nor is it true that painting goes on year-round without ever stopping. Whoever keeps spreading these urban myths has too much time on their hands.

45. For the curious, last time the district was hiring, bridge painters made about $47/hour at entry level. Ironworkers started at about $45/hour.

46. Architect Irving Morrow picked out the color, as well as designing the towers and other Art Deco elements. So credit for the postcards probably goes to him.

48. After that he original pedestrian toll was a nickel, and had risen to a dime 33 years later.

50. The original auto toll: 50 cents, plus an extra nickel for every additional passenger. Motorcycles paid a quarter.

51. Note that originally the tolls went both ways. The current south-going toll system came up in 1968.

52. In 1937, newspapers reported two different women as the winner (“Fiesta Queen”) of a beauty pageant at the opening celebration. Historians have still not figured out who really won. Truly there is no justice.

58. Of the eight major bridges serving Bay Area commuters, the Golden Gate Bridge is the only one not state-owned.

59. The all-time record for bridge auto crossings in one day: October 27, 1989, at 162,414 vehicles. Diversions from the Loma Prieta earthquake accounted for the spike in traffic.

60. The bridge has closed to all vehicular traffic only eight times: Three times for wind hazards, once for construction, twice for anniversary galas (in 1987 and 2012), and twice very briefly for “visiting dignitaries”—President Franklin D. Roosevelt and President of France Charles de Gaulle. Total closure time: 16 hours, 48 minutes, give or take.

61. The original design was meant to withstand winds up to 68 miles per hour, so those three wind-related shutdowns were the only times wind speeds cracked that number.

62. Recent upgrades pushed wind-speed resistance up to 100 miles per hour…and also created some weird side effects. See below for more on that.

63. On the subject of hazards, in high winds or earthquake, the traffic deck can sway more than 27 feet. Best not to think about it though.

64. For being the one billionth car across the bridge in 1985, a local dentist received a case of champagne and a hard hat.

65. The US Department of Transportation estimates another billion have crossed since then. The two billionth-crossing probably happened in 2013, although to be honest such things are always a guesstimate at best–so no champagne this time.

67. Fifty thousand people were anticipated for the bridge’s 50th anniversary celebration. The real crowd was about 800,000. The bridge sagged ten feet, and the swaying left many dizzy and panicked. It was the largest load ever put on the span.

68. The American Society of Civil Engineers listed the bridge as one of the Seven Wonders of the Modern World in 1994, which sounds gracious.

70. You are not allowed to cross the bridge on horseback. Look, we don’t make the rules, we just report them.

71. As of 2021, the speed limit for bikes is 15 miles per hour, and yes, you actually can get a speeding ticket as a cyclist, imagine that.

72. Naturally, such a high profile landmark has a ghost story attached, and equally naturally this ghost is supposedly a ship, the Tennessee, a clipper lost in the strait in 1853 and sometimes reported still sailing in the fog.

73. The bridge district gets frequent requests to scatter cremated remains from the span, but “any person who willfully drops or throws any object or missile from any toll bridge is guilty of a misdemeanor.”

74. This is why the city would also not allow British filmmakers to drop a dummy off the bridge while filming the climax of A View To A Kill (1985), starring Roger Moore as James Bond. Having seen the movie, we wouldn’t cut it any breaks either.

75. Speaking of movies, according to the movie database site Subzin, characters in extant major Hollywood films and TV series have spoken the phrase “Golden Gate Bridge” 175 times. That actually sounds a bit low to us, but then we haven’t really counted.

76. Frommer’s Guide calls it the most photographed bridge in the world. We have no idea how you’d go about proving that, but it sounds right.

77. Other than humans, the bridge’s most frequent users are coyotes, who often come in from the Marin side to seek out new territory in the city when things get too crowded on the north side.

78. To this day, bridge workers operate the fog horns with a manual switch.

79. In August of 1992, the bridge foghorns blew for 359 straight hours; nothing was wrong, it really was just that foggy.

80. The lifesaving net currently under construction beneath the bridge cost around $206 million. California Highway Patrol first petitioned for such a barrier in 1939.

82. So, you probably remember that in 2020 the bridge suddenly started making a weird noise. Some referred to it as “singing”–others “screaming.” It was 2020, so people were all over the map a bit. That phantom sound was the product of the aforementioned wind upgrades and was not supposed to happen; maybe our bridge just decided it was time to speak out on its own behalf.

83. The fix plan proposed last year involves 26,000 aluminum clips which will hopefully interfere with the harmonics. The bill: $450,000.

84. In 2001, students from the University of British Columbia School of Engineering hung a Volkswagen Beetle off the side of the bridge in the dead of night. This is apparently an engineer’s idea of a prank.

85. So, how can we possibly draw this to a close? With an escaped ostrich of course. Yes, that happened: In 2005, a six-foot-tall ostrich escaped from a van and remained at large (very large) on the bridge until recapture. The driver reported that “the ostrich’s butt broke the window,” when he braked. Oh, that old story.