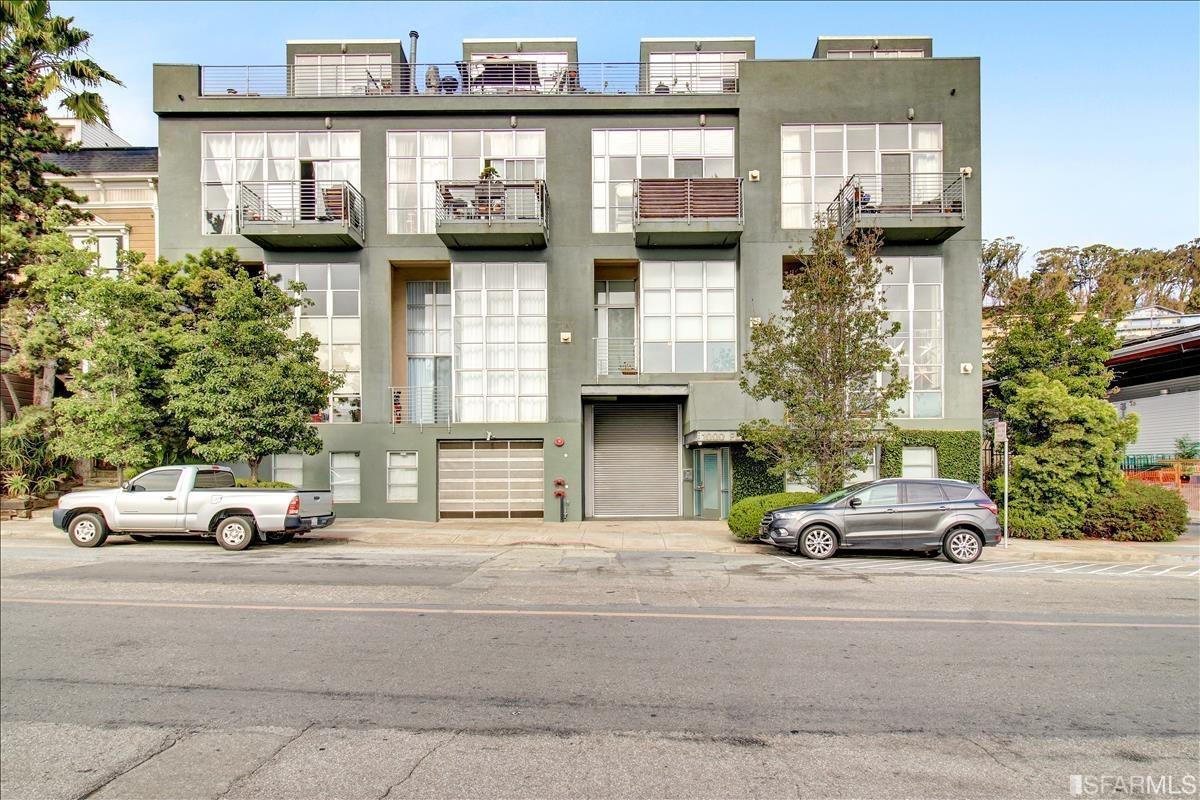 Of all the variated species of San Francisco homes, maybe none is a stranger animal than the “live/work.”

Sometimes these units look little different from any other condo or apartment; other times they’re total oddballs, awkwardly carved out of larger, older buildings for purposes not always obvious to modern observers. And rarely does a home listing bother to distinguish the term “live/work” when it’s used.

For a timely example, look at 1000 Pennsylvania Avenue #10, a quite striking tri-level, two bed, three bath live/work SF condo (one of the hallmarks of live/works is that they often sport extra bathrooms for some reason) that listed this week more than $1.19 million.

Realtor Gina Ocampo Haas singles out details like the “18′ ceilings, huge ventilating windows, and skylights,” as well as “carpeted staircase with steel banister lead[ing] up to a spacious loft bedroom and bath that has private deck”–all of which actually is fetching. But where did all this come from?

In the late 80s, San Franciscans fretted that the high cost of living in the city was driving away artists and creatives–which of course it was. (SF, as it turns out, has been having a housing crisis of some kind pretty much since 1849–only the particulars ever change.)

As a potential solution, in 1988 City Hall created a legal loophole to spur new housing: Developers could create apartments in areas zoned for industrial uses, so long as the resulting homes also served as studios for artistically inclined tenants. Artists, people imagined, would find the weird and funky look of onetime industrial buildings attractive and inspiring.

Looking back, it’s hard to imagine that the city was ever so focused on catering to just this one highly specific face of the housing crisis–but SF’s 20th century reputation as a creative bohemia was important to a lot of people.

In all, the city generated about 1,700 of these units; according to a Board of Supervisors report, more than 70 percent of live/works were built in SoMa, with the next highest volume (16 percent) in the Mission.

You may have noticed that the live/work scheme did not in fact rescue SF’s creative set from the forces of gentrification. What went wrong? The aforementioned supervisors’ report faults a chronic “failure of live/work projects to be used either as artist work spaces or, in some instances, as residences at all.”

What actually happened, the conventional wisdom goes, is that developers simply treated live/works like any other condos, creating just more housing that the intended tenants couldn’t afford. This was illegal of course–the law that allowed these homes to be built demanded that those living there use the space in particular ways–but the city didn’t have any effectual way to enforce the violations. And, well, while the cat’s away…

A 1997 New York Times report estimated that only about five or ten percent of supposed artist residences had any artists residing. By the way, that Times story also reported that in 1996, the median price of a home in San Francisco was $285,000–about $480,000 in modern currency. Those were the days.

These days we mostly treat whole thing as a failed experiment. Other than the height of the ceilings, “at this point in time there is no practical difference between a live/work loft and a regular condo,” SF realtor Jennifer Rosdail writes. Rosdail adds that there is still “a technical requirement” that “at least one occupant have a business license,” but she says she’s never seen it enforced–indeed, we’ve never seen an ad for any of these places so much as mention it.

Even if they didn’t work as intended, many of the homes that came out of this weird cul-de-sac in SF’s housing history remain popular with buyers and sellers alike. “The old-fashioned details in conversion lofts are often charming,” realtors Mike Ackerman and Oliver Burgelman note, citing the appeal of “brick walls, visible thick raw timber supports etc.”

Of course, the reason people like those details is because they remind them of the cheap bohemian living of another era, which makes today’s seven-figure price tags for such places all the more ironic. But that’s just the art of the deal.