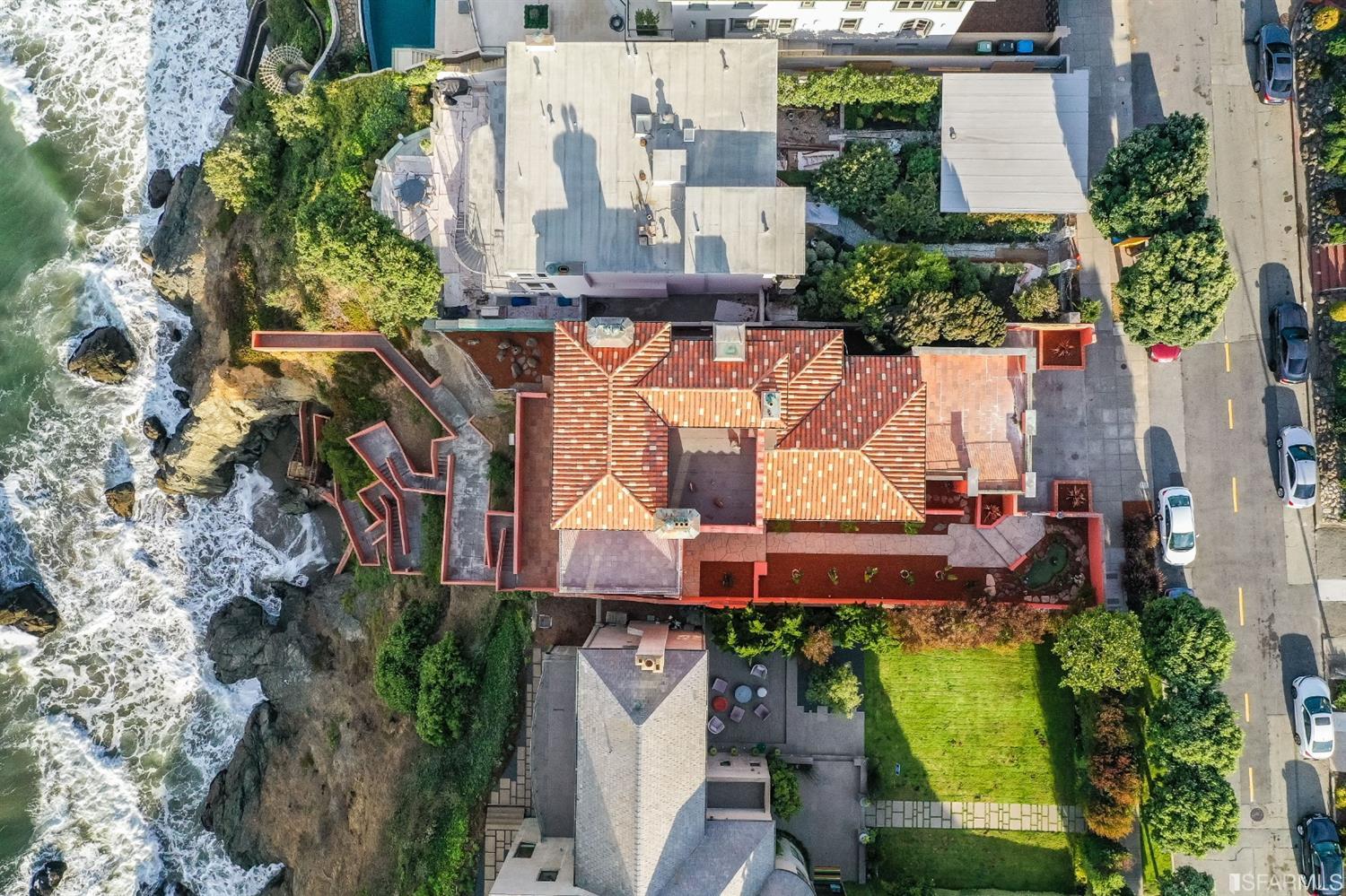 This is Maximum Luxury, a weekly column where we examine some of San Francisco’s most expensive properties, basically just because we’re curious.

And oh do we have a curiosity in store this week: Up on Sea Cliff Avenue, one of San Francisco’s priciest homes also has one of its strangest histories.

The house at 224 Sea Cliff is well over 7,000 square feet and sports six beds, seven baths, and a distinctive pink-orange stucco exterior unlike any other.

The place dates to 1926 and, like most of Sea Cliff, all but has the Golden Gate Bridge right in its backyard. It also features a distinctive, labyrinthine staircase traversing the hillside down to the beach below. Lots of realtors bill their listings as “one of a kind,” but in this case it’s true: Even in Sea Cliff, there is no other home quite like this one. Statistically speaking, there couldn’t be.

And that’s also because this colorful home has a colorful past: This was once the abode of none other than Luke Brugnara, aka “Lucky Luke,” a onetime real estate tycoon who made and lost a fortune buying and selling homes here in San Francisco as well as in Las Vegas.

Lucky Luke’s luck ran out in 2014 when the FBI arrested him on mail fraud charges: Apparently, Brugnara had millions of dollars worth of classic art (including an Edgar Degas statue that remains missing to this day) delivered right here to his Sea Cliff address and then just never paid for them.

Brugnara briefly landed on the FBI’s most wanted list in 2015 when he tried to flee trial. He ended up copping a seven-year sentence but is out of jail now, although note that Brugnara will not (and cannot) benefit from the sale of this home.

If these walls could talk…well, they’d probably have been indicted at some point. But Brugnara’s breaks are old news now, and don’t really reflect on the home (which was also once the residence of actor Cheech Marin, for the record).

224 Sea Cliff remains a beautiful but troubled neighborhood gem, listed for years as a fixer-upper and host to a series of price cuts ever since it popped up in late 2016 asking nearly $20 million (at the time the second-most expensive listing in SF), riddled with liens and old debt.

The current asking is more than $15.37 milion, which is actually up a little from what it was a few years ago. Will this drama ever cease? Maybe if someone finally finds where that Degas ended up. Until then, this house is a classic that most of us still admire only from afar.