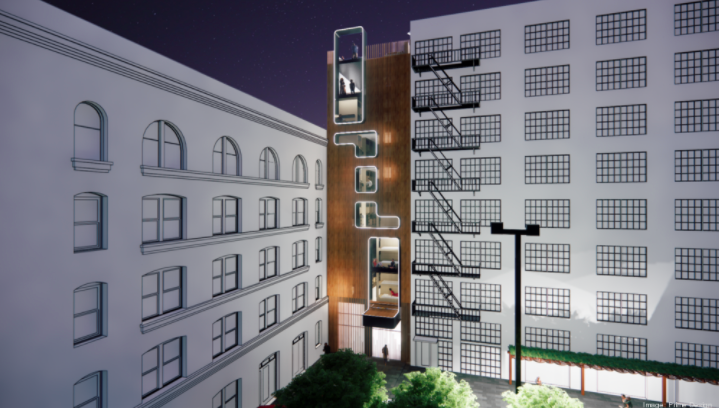 Development news can gets pretty weird in a place like San Francisco, but sometimes a story actually turns out to be much less exotic than it looks.

Case in point, the SF Business Times reported this week that an out-of-town developer wants to bring a so-called “pod hotel” to downtown SF, a proposal that at face value sounds almost surreal.

Upon closer examination though, this is actually not that remarkable of an idea–and in truth, these developers would be much better off if they just said so.

What is a “pod hotel?” For starters, it’s an absolutely terrible name for the speculative project: The proposed hotel would feature six 690-square foot rooms, each of them equipped with around 26 partially enclosed beds, in the style of the “capsule” hotels you sometime see in Japan, but a bit less claustrophobic.

This sounds borderline dystopian, but in reality it’s not fundamentally different from any number of hostels that operate in and around downtown SF already, offering cheap room and board for shared rooms with travelers stacked in bunk beds, usually for very short stays.

Indeed, most of those existing accommodations provide even less privacy than what’s presented in his model, although admittedly most shared dorms at least sleep fewer people than this.

Of course, calling it a hostel would not appeal to the kinds of travelers they seem to want to attract, so someone must spin up a more marketable term. Maybe they assume “pod” is attractive verbiage for the tech set? In reality it makes the whole thing sound weird and dehumanizing, but the idea itself is really not that remarkable.

Where do they want to build it? At 12 Mint Plaza, just south of Market and Fifth; the lot currently hosts a two-story building with a branch of the San Francisco Fire Credit Union, which would be demolished. The property is pretty narrow, and the result would be a very tall, thin 85-foot building. Note that the developers already own the parcel.

Who are the developers? Kansas-based Prime Company, the same team behind a couple of proposed Mission housing developments which would feature dozens of underground micro-units dubbed–really, “pods” again? Who is getting in these people’s ear and telling them that “pod” is a word with positive connotations? Because that person needs to be fired–possibly out of a cannon.

Compared to that, this hotel plan is actually even less strange than it sounds–and at least slightly more likely to carry.

Are they actually going to build it? This is a very preliminary idea right now, and there’s any number of opportunities for City Hall or nearby NIMBYs (Mint Plaza features a lot of high-end condo conversions already) to make trouble for it.

That said, while a nine-story vertical hostel is not something that comes along every day, it’s really not all that outre either, so they’d probably make more headway arguing that this is not a space age, cutting-edge idea but really something fairly ordinary for the neighborhood as it is.