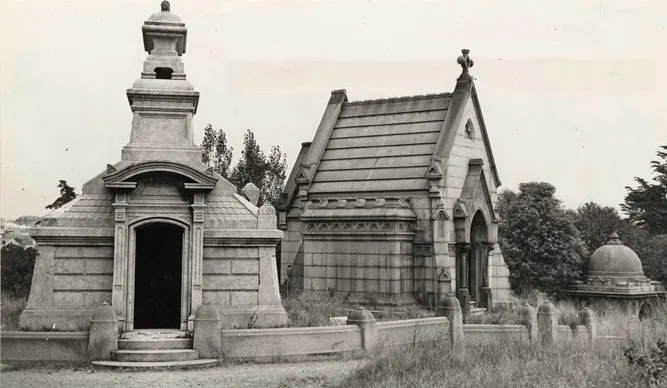 As Halloween weekend looms, our usually very atmospheric metro is missing a certain extra gothic flourish that most cities boast: Other than a couple of historic graveyards in the Presidio and Mission Dolores, San Francisco has no cemeteries within its boundaries. And yes, this is because of real estate.

Contrary to popular belief, SF never banned cemeteries in so many words; rather, a decades-long crusade simply drove out all but the few listed above, as part a very strange bid to evict the dead.

“The expulsion of the dead and the reclamation of their space for the living followed a public debate waged for nearly 50 years, in which the interests of commercial and real estate development were pitted against those of preserving the cemeteries as historic landmarks and public parks,” historian Tamara Venit Shelton wrote in her 2008 paper “Unmaking Historic Spaces.”

Once upon a time, the city hosted several large and historically significant burial sites. But as the city’s population swelled and developers cast their eye on every conceivable block of potentially buildable land, they started to regard the graveyards as, well, dead space.

Anti-cemetery leagues argued that burial sites were unhealthy (which doesn’t really make sense, but okay) and warned that if they lapsed into disrepair they’d contribute to urban blight. In 1900, Mayor James Phelan banned new burials, but getting rid of the existing dead proved trickier.

In 1913, voters sided against relocating the historic cemeteries, presumably because “Should we dig up and haul away thousands of people?” is just hard to write a snappy slogan for. It came up for a vote again in 1924, and again voters said no.

However, by this time, operators of most major SF cemeteries were decamping to Colma of their won volition, assuming that the tide would turn agains them eventually. Just Laurel Hill cemetery remained by 1937, when voters finally approved relocating the whole thing by force.

Time was on the side of the anti-cemetery campaign: Every year that went by, fewer and fewer people remembered anyone buried in the old plots. In all, some 150,000 graves made the trek south.

Or at least, that’s how it was supposed to be: The last ghoulish act in this drama comes with the sporadic revelation that when it came to moving all those bodies, well, here and there they missed a spot. For example, in 2001, excavation for the Asian Art Museum turned up more than two dozen skeletons.

Back in 2016, a very surprised Lone Mountain homeowner stumbled on a 120-year-old child’s coffin whilst renovating her house, and was even more surprised to learn that if historic remains show up on your property, the duty (and expense) of reinterring them elsewhere falls to you. Some people actually end up just reburying them if they lack the funds to secure an expensive Colma memorial.

There are more such surprises waiting under homes across San Francisco; the head of the local Odd Fellows even told us he personally he knows where several are. But the only way to be sure is to start digging–and most homeowners seem content to leave well enough alone.