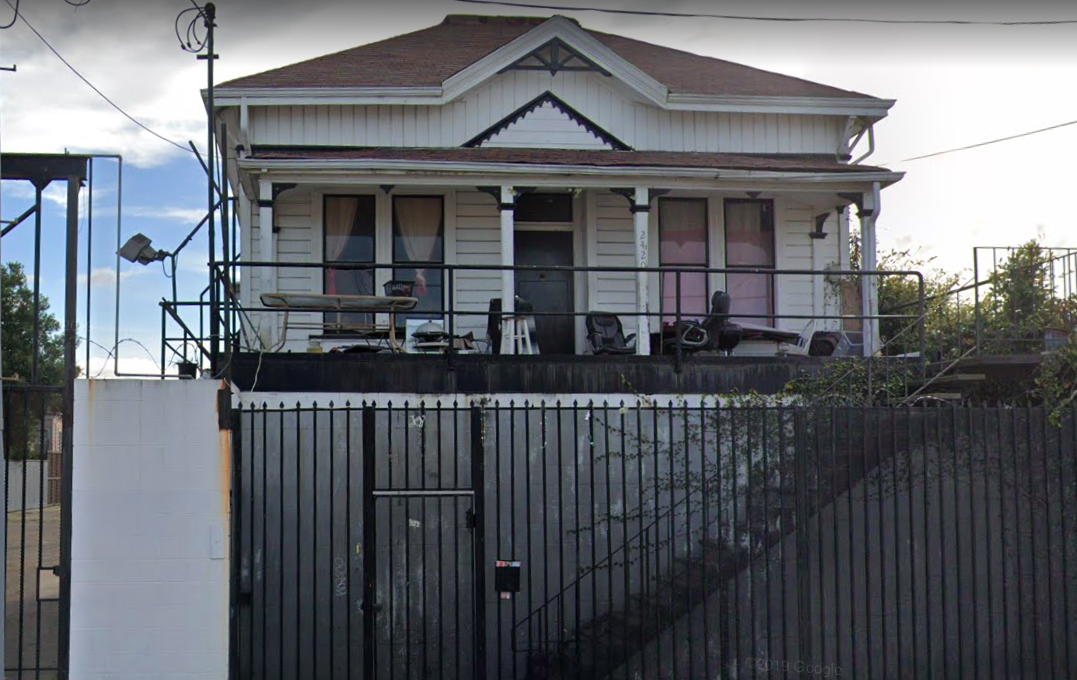 Great news for bargain hunters: There’s a 130-plus year old West Oakland Victorian that’s yours to own for the low, low price of zero dollars. The only catch is: You’ve got to come pick it up–literally.

Riaz Capitol, the current owners of a three bed, 1.5 bath, nearly 1,150-square-foot Vic at 2420 Chestnut, are telling the public, “Take my house, please,” offering the entire place to anybody who will pay to relocate it.

What’s the property? According to Watson Heritage Consulting, a historic preservation firm based in San Francisco, this three bed, two bath Victorian dates to between 1887 and 1888, and in fact the firm’s analysis notes that “the building’s footprint has remained largely unchanged since at least 1902,” making it presumably quite an artifact.

It looks like it’s been sometime since there was a building inspection here–the city doesn’t record anything in the last ten years except a couple of complaints about “excessive trash” on the lot–so there’s no telling what state it’s in. It’s listed as “unoccupied.”

Why are they giving it away? Riaz Capitol wants to demolish the neighboring industrial buildings, merge the lots, and create a 12-unit townhouse project here. They’d presumably like to demolish this old house too, but the preservation consultants say that legally they “must make a good faith effort to relocate the historic resource,” which means offering it at “no or nominal cost” and to advertise it for at least 90 days.

Is it a historic resource? The analysis concludes that the property “does not appear to be associated with events that have made a significant contribution to the broad patterns of California’s history and cultural heritage,” was never the home of anyone of historical significance, and that while it’s “a highly intact example of a Victorian-era residence in West Oakland,” it’s not remarkable enough to be preserved on those grounds.

But because there’s still a chance, the developer must make some token preservation effort–in this case, check if it’s at least possible to give it away.

How do you move an entire house? Baltimore-based architecture firm Encore advises, “There are several ways to move a house,” including “inserting steel beams under the house to provide a platform so the house can be lifted,” and even citing an example from 2019 that involved just pushing a raised building onto an adjacent lot, using dish soap as lubricant.

If you’re moving further than a few feet you can use something like a large carjack to lift it onto a movable platform and then an appropriately spacious truck bed, possibly in pieces. This process can cost tens or even hundreds of thousands of dollars, depending on how big the home is and how far it’s going–but as the firm Wolfe Housing & Building Movers note, the biggest expense is likely going to be whether you have buildable land (and an appropriate foundation) to move it to.

Still, it’s been done: Just in February, San Francisco moved a 139-year-old Victorian home in the Fillmore about six blocks to make way for new development, and in 2016 a Berkeley construction firm offered to move a historic home all the way from Hercules to Napa for the equally historic price of $1.

I’m feeling crazy, who do I talk to if I’m interested? There’s a banner right in front filling you in on your point of contact. But remember, the heavy lifting is on your end.