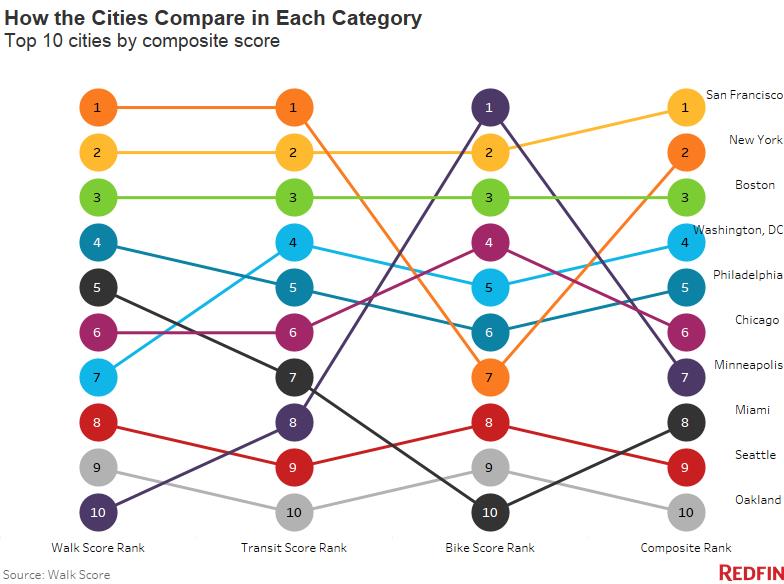 My friends over at Redfin just did a great report ranking the top 10 Cities to live without a car, and guess what…San Francisco wins. They asked me to share it with you, so here you go:
—
What makes a city livable? People have differing views, but for many city-dwellers, proximity to restaurants, grocery stores, parks and jobs are some of the key perks of urban living, especially if those destinations are accessible without a car. According to recent Redfin research, the construction of parking spaces for residential properties is starting to wane, as is the number of families who own two cars. And as traffic concerns and commute times rise across the country, many people are opting out of car ownership entirely.

Redfin compiled the latest Walk Score rankings to see which U.S. cities with populations greater than 300,000 have the highest composite Walk Score, Transit Score and Bike Score rankings. These are places where you could forgo having a car and still be able to get around town in a variety of ways, whether it be by foot, bike or public transit. And while not all cities are created equal, each of these 10 cities has infrastructure to support a car-free lifestyle.

Even though San Francisco takes second place in every category (walking, biking and transit) the overall score is the highest in the nation. This isn’t a surprise. It’s true that most people in San Francisco don’t own cars. Nearly every neighborhood in San Francisco is walkable and the BART and MUNI can basically get you anywhere you need to go. Getting a parking spot with your home will add to the price significantly, and getting around town in your car will drive you nuts…so you might as well just go without. Being able to walk, bike, cable car, or bus to work, dinner, or to get groceries is a privilege we should all embrace.

New York has the highest Walk Score and Transit Score rankings in the nation. Its Bike Score, on the other hand, falls to seventh place. “Even with the bike-share programs accelerating across the city, many streets don’t have special bike lanes and traffic is a deterrent for many people who might otherwise consider biking,” said Redfin agent Jonathan Makolondra. “That said, New Yorkers are certainly accustomed to getting around the city and surrounding boroughs without a car. The MTA subway system is extensive and walking is a great way to take in the sights and sounds of the city.”

It turns out that Boston is a great city for every mode of transportation that doesn’t involve a car. The city ranks third in the nation for Bike,Transit and Walk Score. “In general, Boston is just a really easy city to get around without a car,” said Redfin agent Megan McShane. “In addition to being known as ‘America’s Walking City,’ the T provides access to all the most popular neighborhoods via subway, bus, trolley and boat, and the commuter rail services the outlying suburbs.”

With a Transit Score of 70, D.C has the fourth highest Transit Score in the nation. “The METRO provides a lot of routes into the city from various suburbs and within the city there are also plentiful bus routes,” said Redfin agent Dan Galloway. “Biking is really on the rise too. Capital Bikeshare now has 400 stations across the city and more bike lanes and routes have been popping up. The city also has plenty of walkable neighborhoods like Dupont Circle, Georgetown and Downtown/Chinatown.”

Philadelphia has the fourth highest Walk Score in the nation and it turns out that it’s becoming more walkable as builders focus on creating walkable new construction throughout the city. “Redfin agents have noticed that a lot of walkable homes are being built in neighborhoods like Northern Liberties, Fishtown, Frankford, South Philly and Point Breeze,” said Redfin agent Tom Lewis. “In addition to great walkability, the city offers plenty of public transportation options as well. Philly is also known as one of the top cities in the nation for bike commuters.”

“Especially if you live in neighborhoods close to the Loop, a car isn’t necessary in Chicago. Lincoln Park, River North, the South Loop – they’re all worlds unto their own, where you can walk to everything you need,” said Redfin agent Jenn Kim. “Should you want to get out of your neighborhood, the El is a great option, plus the city’s invested a lot in its biking infrastructure. In the summer, the Divvy bike-share program is popular, and it’s not uncommon to see large groups of people cycling home via Milwaukee Avenue during the evening commute.”

“Last year Minneapolis was the only U.S. city on a worldwide list of bike-friendly cities. Mayor Betsy Hodges’ administration has emphasized building more protected bikeways to traverse town, and there’s always the old favorites like the Chain of Lakes trails and the Midtown greenway,” said Redfin agent James Garry. “Add to that a growing light rail system, on-time buses and vibrant neighborhoods like Uptown and Dinkytown, where you can walk to everything you need, and it should be no surprise to see Minneapolis on this list.”

“Even though Miami ranks high for walkability with a Walk Score of 78, its Bike and Transit Scores leave a little more to be desired. With a Bike Score of 60, two wheels probably won’t take the place of four wheels any time soon, but that said, there are neighborhoods like Downtown and Little Havana where cycling is a viable transportation option,” said Redfin agent Cecilia Cordova. “If you’d prefer to get around town via public transit, there are several options including the Metrorail that runs from West to South Miami crossing through Downtown.”

“The expansion of the light rail up to Capitol Hill and the University District and the recently approved light rail extension plan indicate that Seattle’s Transit Score could be improving within the next year or two, potentially making Seattle an even friendlier city for those who’d like a car-free commute or lifestyle,” said Redfin agent Kyle Moss. “The bus system also offers great options for commuters and travelers alike, and neighborhoods like Capitol Hill, Belltown and Madison Park are really fun, lively places to walk around. For those who love to bike, Seattle also has some fantastic bike trails, many of them scenic like the Burke-Gilman.”

“Oakland doesn’t fall short when it comes to public transportation,” said Redfin agent Mia Simon. “The BART and A C Transit are both good options for navigating the city. In addition, the Trans-Bay express bus just makes a few stops and then heads directly to San Francisco. There’s also a ferry from Jack London Square if you prefer traveling by water. Neighborhoods like Rockridge and Uptown, Lake Merrit/Grand are all super walkable. There are also 13 neighborhoods with a Bike Score above 90, making them a biker’s paradise!”