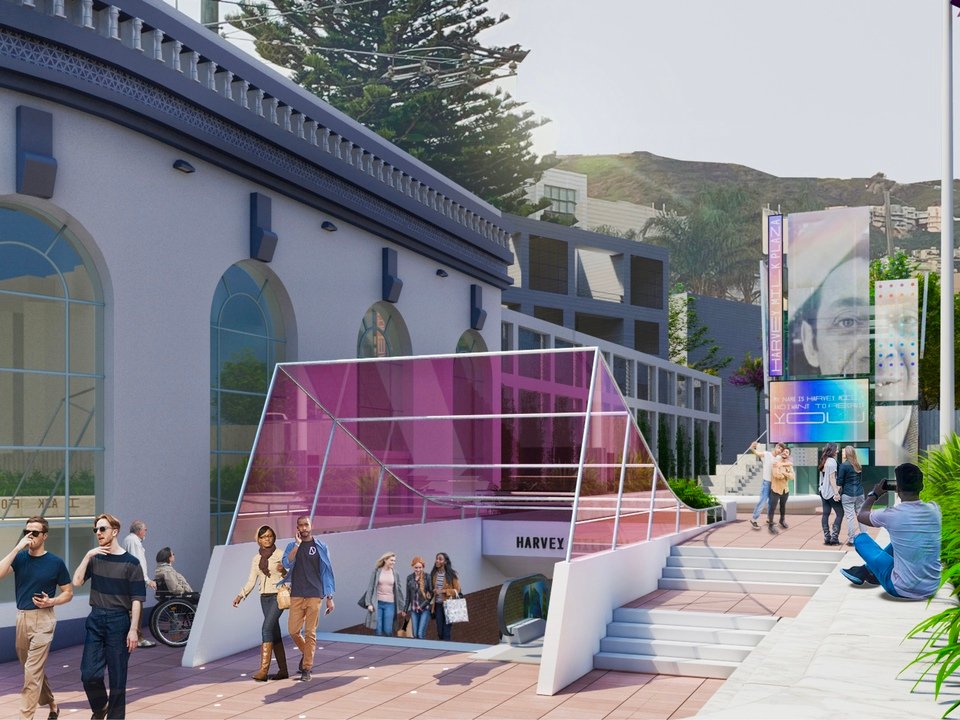 The Castro is one of San Francisco’s most popular, historically significant, and aesthetically pleasing neighborhoods–hence its multiplicity of multi-million dollar homes.

But not everybody loves what’s supposed to be the neighborhood’s grand centerpiece: Harvey Milk Plaza, the much put-upon thoroughfare at the foot of Castro Street that pays tribute to the late San Francisco politician and gay icon.

This week, the Friends of Harvey Milk Plaza, a neighborhood group organized in 2016 to reform the image of the overlooked landmark, released new artist renderings of what they imagine its future to be, a sort of enchanted light corridor that raises the plaza fully up to street level and puts a canopy over the entrance to the Castro Muni station.

The design preserves the critical Pride flagpole while adding new nearby elements like a pedestal that invokes Milk’s public speeches at the corner of Castro and Market, and digital displays meant to recall latter-day protest signs. Below, the entrance to the train station becomes a “flexible gallery space,” partly illuminated by a lightwell from the street.

The fight over the plaza future stretches back years. Gadflies like the Friends of Harvey Milk Plaza characterize the current “sunken garden” locale as grim, unwelcoming, and easy to overlook, being almost entirely consumed by the Muni entrance nearby, and started pushing for a redesign in early 2017, originally motivated by SFMTA plans to make the station more accessible by installing a street-level elevator.

Of course, not everyone in the Castro community is backing the idea of a revamp: Original plaza architect Howard Grant defends the current circa 1980s setup as a “transitional” design meant to gracefully ferry riders from the station to the street, and argues that the sunken areas grant a dramatic reveal of the Castro and Market intersection as pedestrians rise up and out of the underground space.

Raising the plaza up to street level would cut off the transit and pedestrian experiences completely, Grant complains. Grant’s competing Advocates For Harvey Milk Plaza group argues that the city and neighborhood can better champion Milk’s legacy by reforming the current plaza.

The COVID-19 pandemic briefly put these Milk mixups on hold, but as SF reemerges from our long hibernation we find old arguments waiting for us. In a way it’s almost comforting: A lot has changed in the city, but people still love their homes, their neighborhoods, their history, and their traditions–enough to fight about them year after year.