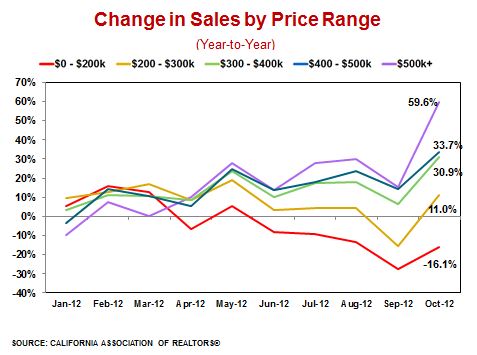 I always hesitate to post any California housing article that begins with “Los Angeles”, but here goes anyway:

“Sales surged to the highest level since May, with demand continuing to be strong across all parts of the state,” said 2013 C.A.R. President Don Faught. “Sales were particularly robust in the coastal markets, but they also rose significantly in many non-metropolitan areas, as confidence toward the housing market continued to improve. Most counties in the Northern California region, for example, posted double-digit year-over-year sales gains in October.”

Closed escrow sales of existing, single-family detached homes in California totaled a seasonally adjusted annualized rate of 544,380 units, according to information collected by C.A.R. from more than 90 local REALTOR® associations and MLSs statewide. Sales in October were up 12.5 percent from a revised 484,050 in September and up 10.2 percent from a revised 493,790 in October 2011. The statewide sales figure represents what would be the total number of homes sold during 2012 if sales maintained the October pace throughout the year. It is adjusted to account for seasonal factors that typically influence home sales.

The statewide median price of an existing, single-family detached home declined 1.1 percent from September’s $345,000 median price to $341,370 in October. October’s price was up 23 percent from a revised $277,450 recorded in October 2011, marking the eighth consecutive month of annual price increases and the fourth consecutive month of double-digit annual gains. The year-to-year increase was the largest since May 2010.

“Although the statewide median price was off its recent high reached last month, it is not unusual to see an October dip in price as we transition from the peak season to the low season,” said C.A.R. Vice President and Chief Economist Leslie Appleton-Young. “The year-over-year price gain, on the other hand, has been accelerating since early 2012, as sales of higher-priced homes continue to improve. With the supply shortage, especially of lower-priced homes, expected to remain an issue in the near future, we will likely see solid year-over-year price gains through the first quarter of next year, as sales of higher-priced homes grow.”

Other key facts of C.A.R.’s October 2012 resale housing report include:

All you San Franciscans, focus on the hyperlocal San Francisco stats, which you can find here: