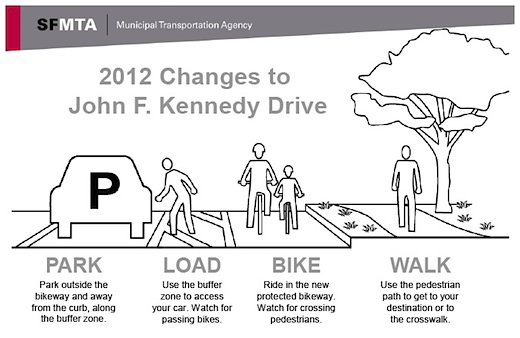 Have you made a trip into Golden Gate Park recently (maybe to go to the De Young Museum or Academy of Sciences), and wondered what the hell is going on with some cars parked on the curb, some parked (what would appear to be) in the middle of the road, bikes zipping by in between the cars and curb, and a general mess of people trying to figure out what to do on John F. Kennedy Drive? You’re not alone.

I happen to ride that route 5 days a week taking my boys to and from school and I’ve seen just about every possible combination of confused tourist, angry hipster on fixie, mom with stroller in the bike lane, and SUV parked in the red zone you can imagine.

Be enlightened! Embrace the change!

Study the above diagram. Watch the video. Visit the SF Bike Coalition website and read their post about it.

Then go to Golden Gate Park. Walk, ride, drive, park, stroll, skate, and do your thing…all without spilling your latte.

It would be great to see more of these lanes throughout the city, especially since so many people in San Francisco are turning to two wheels instead of four as their preferred method of transpo…

Score one for San Francisco!