I’m in process of securing a pied-à-terre for a client in 25 Hotaling Place*, and I was reminded of not only what a great building it is, and how rich it is with history, but also what an incredible location! 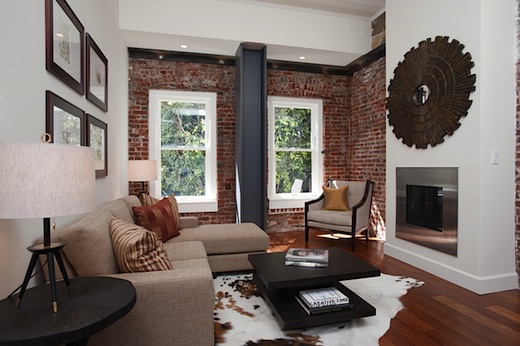 The best of San Francisco right at your doorstep
Located in San Francisco’s historic Jackson Square District, 25 Hotaling Place is surrounded by four of the city’s most vibrant neighborhoods—North Beach, The Financial District, Chinatown and The Embarcadero Waterfront. Intimate cafes, sophisticated restaurants and colorful watering holes are just steps away and a stone’s throw from the city’s spectacular waterfront.

A little street with a big past
Originally called Jones alley, the small street that runs between Jackson and Washington Streets started life as an alley servicing the warehouses of old San Francisco’s bourgeoning waterfront. In the early 20th century it was given its present name—Hotaling Place— commemorating one of the Gold Rush-era’s most successful entrepreneurs.

Anson Parsons Hotaling arrived in San Francisco in the mid-1850s and founded A.P. Hotaling & Company, a distributor for Cutter’s Bourbon Whisky. During the 1906 Earthquake and ensuing fire, sheer luck and a change in wind spared Hotaling’s warehouse. This led to one local commentator to pen the following lines that are now etched in the city’s folklore:

“If, as they say, God spanked the town for being over frisky, Why did he burn the churches down and save Hotaling’s Whiskey?”

To put it in my words: the location is BUTTER!!! One of the best spots in San Francisco. Right smack dab in the thick of it all, yet quaint enough to feel like you just stepped into a small part of history, lore, and a European side street. One of my favorite restaurants (Bix) is just around the corner, you can purchase any number of SWEET espresso machines and grinders around another corner at Thomas E Cara, Ltd, and for those of you that love a little late night entertainment, you’re stumbling distance to all that jazz too. It is quite simply, awesome.

Guess what? If you missed out on getting into this building before, your chance may just be coming around again. There is talk of another resale unit hitting the market soon (maybe not on MLS), and I have the inside scoop. So if you’ve been looking for a place in and around Union Square, Financial District, North Beach, Embarcadero, have I got the property for you! Oh…if you like Frida Kahlo and Diego Rivera you’re really going to want to contact me.

Since we’re on the subject of Hotaling, you might like to try some of Hotaling’s Whiskey, produced by San Francisco’s own Anchor Distilling Company, while you ponder the possibilities of owning a slice of San Francisco history.

*25Hotaling.com is from the original marketing of the property and is NOT the current unit for sale, or necessarily an accurate depiction of the unit coming for sale. The finishes, exposed brick, and location are indeed accurate.