Just when you thought you had it dialed, those darned Realtors go screwing with the neighborhoods.

“The SFAR MLS will be rolling out a significantly revised version of its District/Subdistrict map during the evening of August 10, 2010.

Boundary Changes:
· Dividing line between 7b (Pacific Heights) and 7d (Cow Hollow) jogs south for one block at the west end and changes so that both sides of Green are in 7d (Cow Hollow) between Lyon and Divisadero. The boundary between Divisadero and Van Ness remains the same, keeping both sides of Green in 7b (Pacific Heights)

· 5e (Parnassus/Ashbury Heights) changes to include a portion of 5b (Haight Ashbury) which is commonly known as Cole Valley, and is renamed Cole Valley/Parnassus Heights accordingly 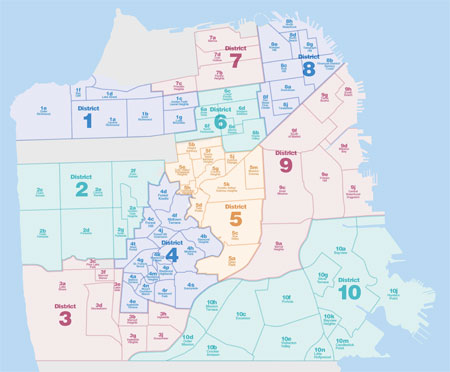