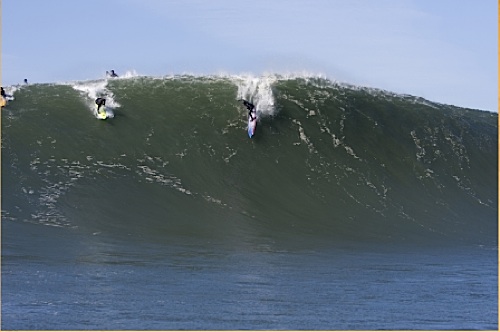 With the official site showing “contest could happen any day”, and Surfing Magazine, confirming the Maverick’s Big Wave Surf Contest is back on for 2009, we, the little SF real estate blog, are bringing you first rumors (from very reliable sources) that the 2009 contest may kick off this weekend! Yes, that’s only a few days after the opening ceremonies were held down in Half Moon Bay. <a href=" Big swells are forecast, as are favorable conditions, so get ready.

Check the official site for the official word, but don’t be surprised if it does go down this weekend. We tend to think they’ll drag it out like they always do and wait until the very last big swell of the year, but 2009 is nothing like 2008 so who knows.

There are a couple of San Francisco surfers in the contest, such as Ryan Seelbach, Alex Martins, and Grant Washburn. Go on and show your support for San Francisco! Say no to a Santa Cruz surfer winning the contest, and certainly not a repeat from a South African! This wave is practically in our backyard, so there is no reason SF can’t take home the prize.

We’re putting our money on Ry Dawg, so if he wins we can pay our debt to Alex Martins for the nice job repairing a few dings.

Best of luck to everybody involved. Let’s hope this thing rolls this weekend.