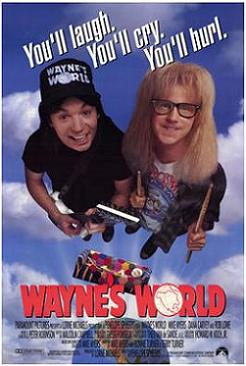 The way an item is advertised, say, a movie, or a house, can indeed lure in the consumer. It can also amuse, annoy, or even repel.

To illustrate, let’s look at Pete Hartlaub’s very funny article on movie taglines. To quote. taglines are proof that

“in the minds of Hollywood marketing executives, the IQ of the average moviegoer is about 63. Either that or the IQ of the average tagline writer is 63. How else to explain this sentence on the poster of the 1977 movie ‘Suspiria’: The only thing more terrifying than the last 12 minutes of this film are the first 92. Or this gem, from the 1982 action film ‘Silent Rage’: Science created him. Now Chuck Norris must destroy him. Other taglines seem painfully obvious (See ‘The Matrix Revolutions’) or intentionally cryptic. I’m still trying to figure out what this tagline means, from the 1998 film ‘Urban Legends’: It happened to someone who knows someone you know … you’re next.”

The article also points out that some taglines are just lazy. Way too many sequels, for instance, just include “again” and are otherwise identical to the original:

“Hellbound: Hellraiser II”: It will tear your soul apart … again!

“Candyman: Farewell to the Flesh”: Dare you say his name 5 times … again!

Okay, so now the tie to real estate marketing. A brief look at listings on the MLS now shows that over 30 are “in the heart of the city.” How many hearts does SF have, people? Can we agree, for once, where the geographic heart really is? And what that means? Is it the center? Or is it the most lively part? Or where the money is made? Or where people get laid most often?

Other listings are just over the top enthusiastic. The homes are fabulous, excellent, dazzling, and gorgeous, all at once. It’s like that high you get from eating pop rocks and drinking Coke. Too much!

Another curious tactic is the employment of CAPITAL LETTERS and exclamation marks. We know they import emphasis. But why emphasize at random?

Over 2000 square feet, 3 stories, and primest property in the Richmond District. Needs lots of work. A pure Diamond in the rough yet worth $1.5 million after the fact!

Another odd ad caught my eye on Craig’s List because the tagline, frankly, well… see for yourself.

Okay, the last one is clearly a fake, but it definitely proves the power of the tagline, because I bet you, future buyer, have to look. Meanwhile, you might skip on of the ubiquitous “fabulous heart of the city dazzlers” simply because you can’t tell them apart.

8 thoughts on “Sellers: Consider Your Tagline”